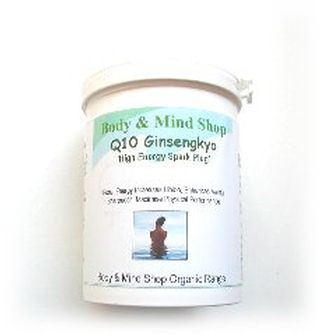 Q10 Ginsengkyo combats chronic fatigue, helping you to maintain vitality and provide a unique blend of Antioxidants, the most important defences against many of the diseases of old age - and perhaps even ageing itself.

This powerful complex with the presence of Co-enzyme Q10 (Co Q10) has a naturally stimulating effect on the energy intensive cells of the heart and also acts as a powerful antioxident to help to protect the body from free radicals.

Ginkgo's many benefits include maintaining circulation to the body's extremities and help maintain mental and physical performance. The benefits of Ginkgo build up, so for best results take this complex for three months.

Ginkgo Biloba has been used for centuries as a natural way to help improve your memory. The herb has long been cultivated in China and comes from a tree known as a living fossil, because it has been around for millions of years (some planted trees at temples are believed to be over 1,500 years old). It works by increasing blood flow to the brain by regulating the tone and elasticity of blood vessels, which therefore increases the oxygen supply to the brain. Korean Ginseng has had long term use for improving mood and concentration.

Recent research has now shown that taking the 2 in combination has favourable effects on learning and memory and can help to reduce the effects that stress may have on the body and mind. As well as aiding memory and concentration, it may slow down the progress of Alzheimer's disease, and lessen depression and anxiety in the elderly. Ginkgo increases blood flow to the arms and legs, as well as to the brain, so alleviating coldness in the extremities (Raynaud's disease). It may also help with tinnitus, dizziness (vertigo) and leg cramps.

This unique blend of Ginkgo Biloba, Korean Ginseng root and Q10 acts has a powerful combination for both sexes.

CoQ10 has proved remarkably effective in maintaining circulation, immunity, the cardiovascular system, teeth and gums. In Japan it is so powerful it is used as a major treatment for certain heart conditions. It is little wonder that 12 million people in Japan choose to supplement their diet with CoQ10. Dentists in the UK now are recommending CoQ10 to aid in maintaining healthy gums. Athletes also find the oxygen and energy enhancing properties beneficial together with people at work attempting to maintain a clear head and those looking for that extra energy release. Continuing research is being undertaken World-wide on this most amazing substance. In studies, diseased gum tissue has been shown to be deficient in Co Q10.

As we get older our bodies produce less natural sexually empowering complexes with Q10, so taking a supplement can help you maintain your libido vitality. (Don't forget to nourish and treat your partner, too!).

See also - Male Arousal Virility Patch
- provides strength with vitality when needed for both the male and female. The patch is designed to stimulate sexual response and revive arousal powers, allowing you to achieve the naturally stimulating drive for satisfying sexual performance.