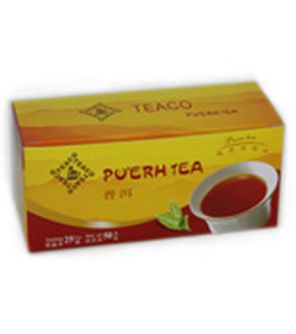 Pu-erh tea is a great fat busting weight loss product, known for its ability to help digest fatty foods, as well as increasing the metabolism and reducing cholesterol levels.

Our recommendation is that you drink Pu-erh Tea three times a day after meals for three months - and watch the weight drop off! After three months, drinking just one cup per day will help maintain your weight loss.

Pu-erh tea is a type of tea made from a 'large leaf' variety of the tea plant Camellia sinensis and named after Pu'er county near Simao, Yunnan, China.

Victoria Beckham is reportedly a fan of Pu-erh tea and drinks it when she wants to drop a few pounds or maintain her current slim build ...

How to make Pu-erh Tea

Our tea is made to the highest standard and, when infused with boiling water, gives an earthy and full taste. It is perfect for drinking on it’s own or flavoured with a slice of lemon or ginger. Each teabag can be used to make 2 separate cups of tea:

2. Steep the teabag for two and a half minutes - Throw away the teabag.